Why You Should Care About Your Vagus Nerve 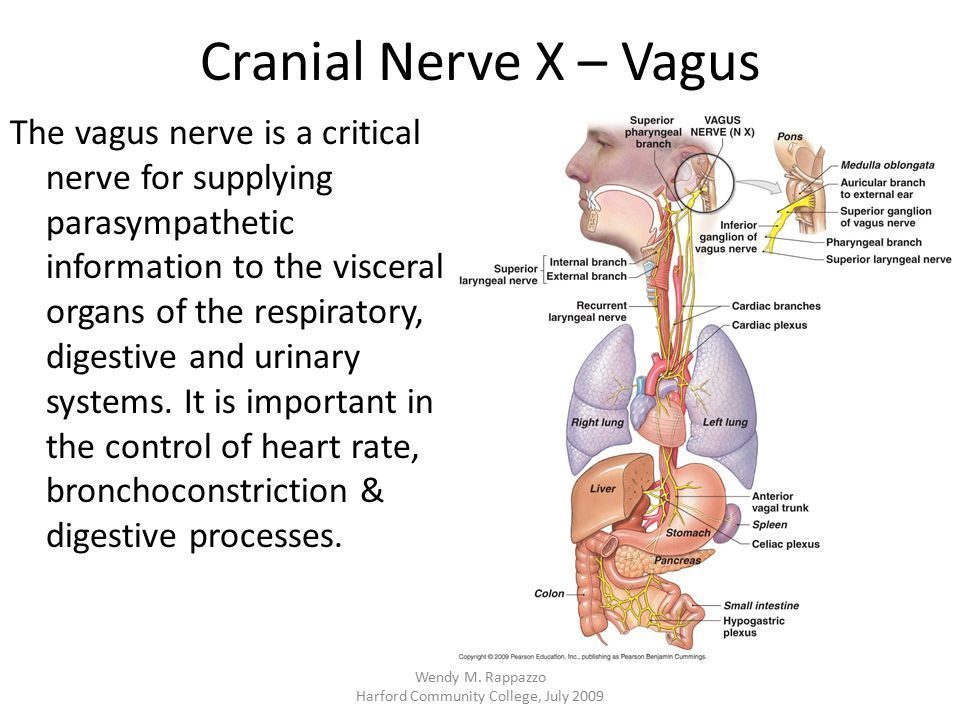 If you suffer from anxiety, panic (attacks), depression, a functional medical problem like chronic pain, chronic back pain, migraines, or POTS (just to name a few), or a functional gastrointestinal problem like Irritable Bowel Syndrome (IBS), then you should care about your vagus nerve. The vagus nerve is heavily involved in Autonomic Nervous System (ANS) regulation, and the regulation of your ANS is key to your healing.

In the last blog post, I gave you twelve ways to stimulate your vagus nerve in order to facilitate ANS regulation. In this blog post I’m going to talk more about the ANS and get into the details about how the vagus nerve is linked to the ANS and how stimulation promotes healing.

What the Vagus Nerve Is

The vagus, or wandering, nerve, is the body’s 10th cranial nerve, connecting your brain with your gut and the rest of your vital organs, including the lungs, heart, stomach, liver, spleen, colon, and other parts in the abdominal cavity. In other words, your nervous system is directly linked to your digestive, circulatory, respiratory, endocrine, immune, and renal systems.

What the Vagus Nerve Does

The vagus nerve is very much involved in the regulation of your Autonomic Nervous System (ANS), which is comprised of the Sympathetic, Parasympathetic, and Enteric Nervous Systems. These three systems work together without your conscious control to regulate all kinds of ANS activities.

The Enteric Nervous System (ENS) is often referred to as your body’s “second brain”. The ENS looks structurally like brain tissue, houses as many or more neurons than your spinal cord, and contains all of the same neurotransmitters (chemicals that facilitate the transmission of neuronal messages) that are contained in your “first brain”. Your ENS is like another right brain with “feelings” and sensations without a left brain to put into words and logic what it is experiencing. What it experiences, like many of your most vital organs, has a whole lot to do with what your sympathetic and parasympathetic nervous systems are doing.

The Parasympathetic Nervous System is more complex than previously thought. Based on Stephen Porges’ Polyvagal Theory, it is believed that you have not one but two distinct branches of the parasympathetic nervous system. And guess what? The vagus nerve is home to both of them!

The Two Branches of the Parasympathetic Nervous System

The ventral vagal branch is attached to a variety of bodily structures in your face, neck, and upper chest that relate to social engagement. Think of the ventral vagal system as the “tend-and-befriend” parasympathetic branch associated with bonding and connecting with people.

In Good Times and In Bad

As you can see from the list above, both ventral and dorsal branches of the parasympathetic nervous system are involved in many activities that happen when the body is not under stress. In fact, Sympathetic, Ventral Vagal, and Dorsal Vagal systems all work one way in good times and another way in bad times. For example, the sympathetic nervous system is involved in any kind of movement we make, like exercise, which is not associated with the fight-or-flight response that happens under stress. The Dorsal Vagal system works to promote ease and flow in good times, while under extreme stress like a life-threatening situation, the dorsal vagal generates a freeze or shut-down response, leading to evacuation—diarrhea or vomiting. The Ventral Vagal System promotes connection and relationships, facilitating communication and eye contact, when we feel safe enough. When we don’t, the Ventral Vagal System shifts toward disconnection. You have probably experienced this in conversations…You know when there is flow and good feeling in relationship? That is you and the other person in pleasant ventral vagal activation. And when there’s not, one or both of you has moved to some degree out of that pleasant ventral vagal state.

When you stimulate the vagus nerve in one of the twelve ways mentioned in my last blog post, you directly stimulate the parasympathetic nervous system in a benign way, facilitating digestion, rest, ease, inner peace, compassion, and connection with others. Over time, as you give your body more experiences that stimulate your parasympathetic nervous system, repeatedly disrupting the ANS patterns that underlie your psychological and physiological symptoms, your body learns how to shift into greater ease. When you shift out of patterns that keep you chronically stuck, you will find relief. The more often you find relief, the more your body learns how to go into these patterns and then come out of them. As you practice going in and out of these patterns, you are teaching your ANS how to be more regulated.